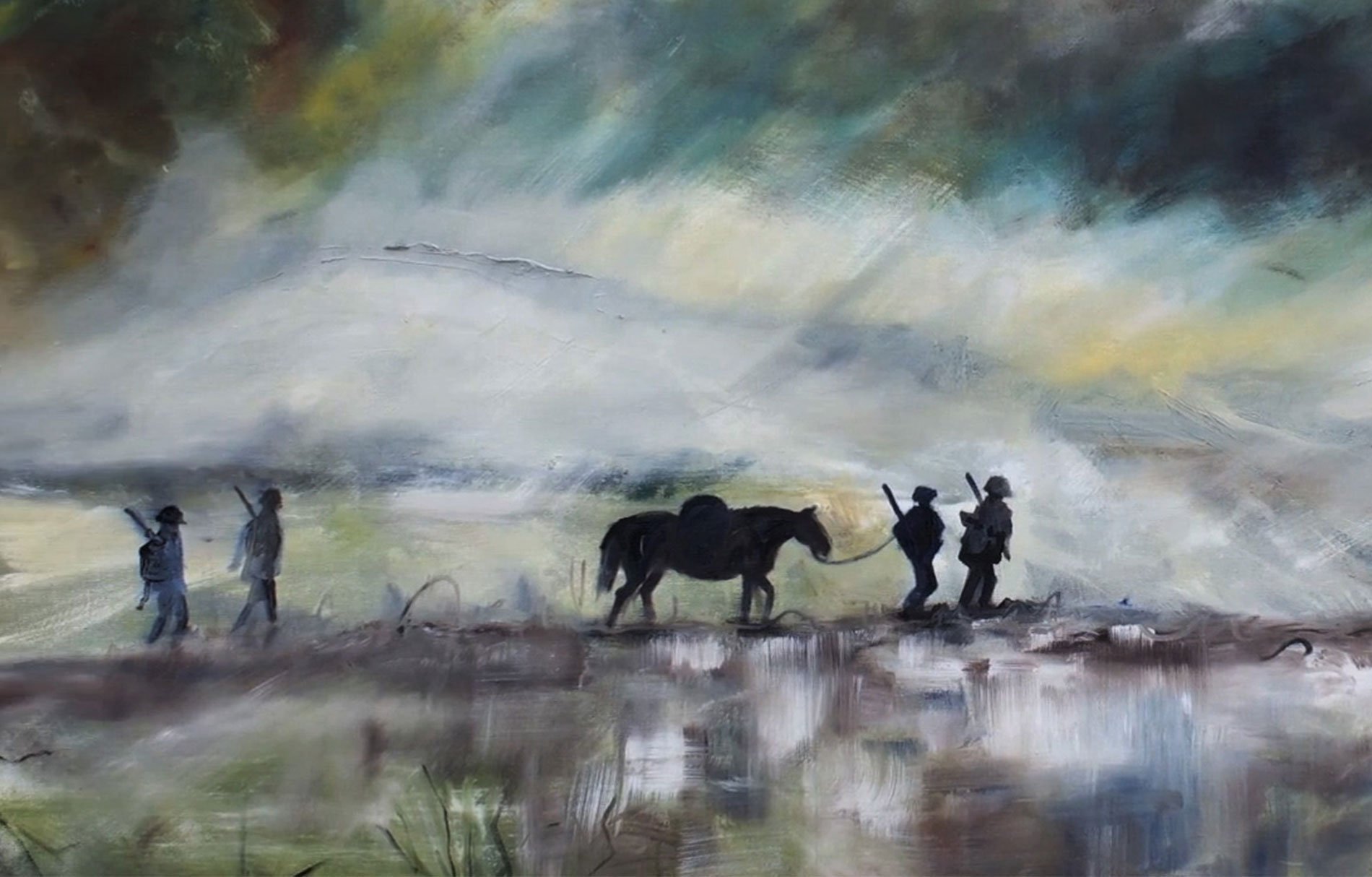 Extract of Military Horses. Oil on Canvas. In Private Collection

Wish to purchase this painting? Get In Touch Today!

For this special centinary of the First World War I would like to pay a special tribute to the millions of horses that died in the conflict on both sides of the trenches. As an artist who specifically interested in the equine as a form of art, I would like to pay my respects to these animals who gave their lives, hearts and minds without questioning the purpose. Each day from 2nd November I will be posting a charcoal drawing, A1 size, between 7pm to 8pm until Sunday 11th November. If you want to purchase a unique personal tribute at the special price of £195 please visit https://paintingsbycaro.co.uk/store/ or alternatively email info@paintingsbycaro.co.uk for an invoice and direct transfer payment

“Despite millions of words written to glorify the soldier’s courage in war, little praise has been given to the horse that bore him” – Jilly Cooper, Animals in War, (2000). Cooper’s words here perfectly illustrate how for the majority of the history of human conflict, the horse was considered as much a weapon of war as any rifle, sword, cannon or bayonet. Although, the horse is obviously different from these inanimate chunks of steel as it is the only one capable of perceiving and experiencing the horrors and agony of war. Unfortunately, despite this fact, millions of horses have been thrown into battle over the course of history and countless numbers were killed and wounded as a result. While horses have been used in warfare for thousands of years, the culmination of this role arguably was The First World War. At the outbreak of war in August the British Expeditionary Force (BEF) had only 25,000 horses to serve as cavalry. Nonetheless, the cavalry units of the BEF were some of the earliest to receive commendations as in the first month of the war 3 Victoria Cross medals were awarded to cavalrymen. Captain Hornby of the 4tn Royal Irish Dragoon Guards was also credited with the first British kill of the war as he was able to kill a German soldier with his sword. This early success for the cavalry on the Western Front was short lived however, as once the German offensive had been stopped at The Battle of the Marne and The First Battle of the Aisne, 4 years of static trench warfare would follow. For cavalry this was problematic as they relied on manoeuvre and speed in order to exploit breaks in the enemy line. With the deployment of barbed wire and emplaced machine guns however, the shock tactics of cavalry would prove very ineffective. Towards the end of the war however, once the stale mate had been broken, cavalry again saw action. Often, they were used alongside tanks such as at The Battle of Cambria, yet their effectiveness was a shadow of what it had once been. Even though during the war many British commanders tried to cling onto cavalry as an effective weapon, it was generally accepted that The First World War signalled the end of the mounted soldier. The period of cavalry dominating the battlefield may have been coming to an end during The First World War but the use of horses in battlefield logistics had never been stronger. Horses were used by all sides to perform a number of battlefield support roles such as pulling heavy guns, delivering supplies and serving as battlefield ambulances. Although these horses were no longer in the direct line of fire they were still in constant danger. The harsh conditions such as thick mud and freezing winters would claim the lives of many horses. Long range artillery and disease were also persistent threats that effected both the horses and the men using them. But the relentless workloads would prove to be one of the harshest factors as many horses were simply worked until the point of exhaustion. Over the cause of the war the British deployed over a million horses and mules in service of which 484,000 horses, one horse for every two men, would perish. Thankfully large scale conflicts of the likes of the First World War have become a thing of the past and due to massive mechanisation efforts made by militaries around the world the use of the horse in warfare has dramatically decreases and no longer do we have the ‘horse as a weapon’ mentality.

Remembering the Horses of the First World War